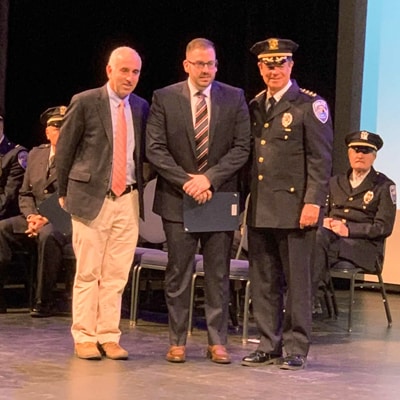 Paraco’s very own Long Island Bulk Delivery Driver, Anthony, was recently honored with a Certificate of Appreciation and Public Service Award  by the Town of Southampton and the Southampton Police Department.  Anthony’s swift and selfless action to a Silver Alert resulted in an individual suffering from dementia and reported missing from his home in Nassau County, in receiving appropriate medical attention and being safely returned home.  Anthony said on his drive into work he noticed a Silver Alert on the LIE that included a vehicle description and license plate for a missing person.  Later, while headed toward his work route, Anthony saw the vehicle that was posted on the Silver Alert merging right in front him by Little Cobb Road.  He called the non-emergency number to confirm he had spotted the correct vehicle while continuing to follow the driver, and gave the Police his current location. The subject turned out to be someone with Alzheimer’s who had gone missing from Uniondale 24 hours prior. Anthony felt honored to be the recipient of these awards through the Southampton Town Police Department at their annual award ceremony on January 22nd, 2020.

We proudly recognize Anthony for his outstanding and distinctive contribution.  His dedication reflects an unselfish devotion to the highest ideals of the police service and a sincere interest in the betterment of Southampton’s community.

A clip from the Award Ceremony: