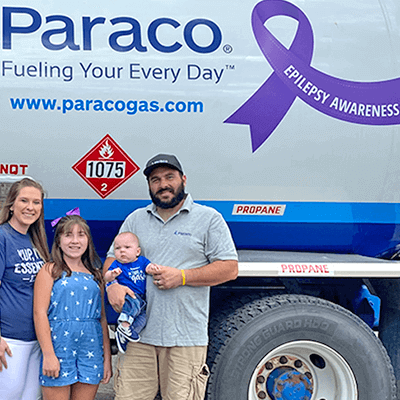 Paraco driver Ryan Whitaker never expected to be an expert on epilepsy.

“If you don’t know what epilepsy is, you learn pretty quick when your child gets epilepsy and starts having seizures.
I didn’t know anything about epilepsy before this. After the last six years, I could probably teach you a class on epilepsy.”

Savannah was at pre-school when she experienced her first grand mal seizure, which is the type that probably jumps to mind when you think of them: seizures include violent muscle contractions and loss of consciousness.

Now Savannah is 10, and while major events are a thing of the past thanks to medication that controls seizures, she does still experience a type of seizure known as absence seizures.

Ryan describes these as, “Staring at a particular spot, item or location. It could be a building, or inside on windows, and it basically puts her in a trance.”

Many people experience seizures early in life and then grow out of them, which is what the Whitaker family hopes for Savannah.

To reflect this major part of his and his family’s life, as well as to raise awareness, Paraco was proud to outfit Ryan’s bobtail propane truck with a giant purple “Epilepsy Awareness” ribbon when he approached Paraco Executive Vice President Christina Armentano about the idea.

The ribbon was added to both sides of the truck by Timely Signs of Kingston, New York.

“Tyson and his crew there did a great job on the ribbon. They put it together in the computer, sized it up just right, and it looks awesome.”

Many people don’t realize that there are different kinds of seizures, which is part of why having the Epilepsy Awareness ribbon on his bobtail truck means so much to Ryan.

He says, “It’s a serious illness, but with the right medication, it can be controlled.”

Savannah also has a service dog named JohnE that Ryan says has been an amazing addition to their family.

Trained for a year and a half, the family traveled to Lincoln, Nebraska for 12 days to get to know the dog and bring him home from a specialty service that trains service dogs for all types of aid.

JohnE is an English Cream Golden Retriever, a breed known to make excellent service dogs. JohnE responds to over thirty commands and is trained to help in the event that Savannah has a seizure.

“If she needs something from the floor, the dog can pick it up and bring it to her. He can even open doors.

If she has a seizure, he pushes her over on her side safely, then lays next to her after he alerts. If we’re home, he rings a bell to let us know that she needs help. When Savannah gets up, JohnE gets up.”

Ryan wants more awareness out there, which is why he feels displaying the ribbon is so important.

“I had asked a previous company to do the same thing, and they dragged their feet.

Christina and [Paraco CEO Joe Armentanto] came up to the facility a few times, and when I introduced myself to Christina and asked her about the ribbon, she made it happen.

I want to thank the Paraco corporation, the Armentano family, and everyone involved with making this ribbon happen.”